Tail: Straight when relaxed with a switch on the end. When excited or in motion the Juliana tail may curl or twist.

Color: Always spotted the base color can be silver, white, red, rust, black, or cream. Spots are generally black but can also be red or white. Spotting should be profuse and random, not in a piebald pattern. Spotting may fade or blend in as the hair coat gets longer, but pigmentation on the skin must be visible when washed or shaved. Hair coat is coarse, thick and may be quite long in the winter.

Disqualitications: A solid coloration with no spotting. Height over 19 inches. 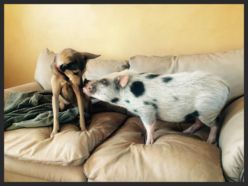 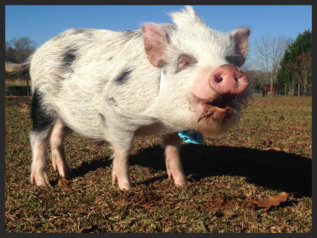 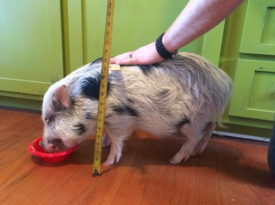 General appearance: The Juliana is a small, colorfully spotted pig. It more closely resembles a small version of a large hog or feral pig then it does the Pot Belly pig. It should be lean, longer then it is tall, and athletic in appearence. The Juliana should never be pudgy, heavily wrinkled, or sluggish in appearance. 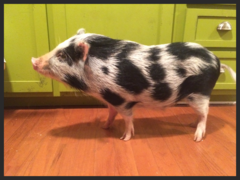 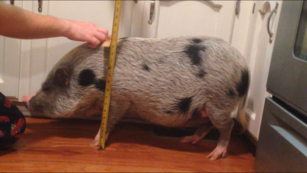 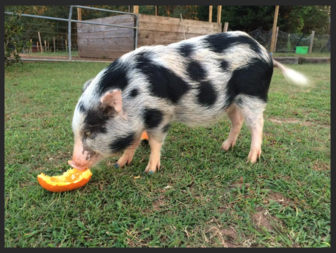 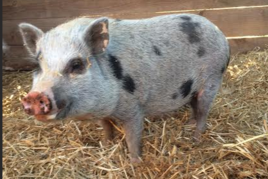 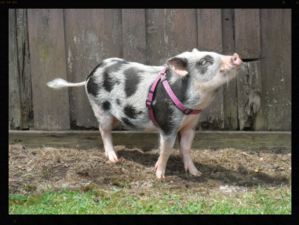 Body: Lean and musculular the Juliana pig should never look round or flabby. The top line should be straight and of good length. Chest and shoulders should be of medium width, neither broad nor narrow. A slight sway in the back is permissable but discouraged. Belly should be clean and firm. A slight roundness in the belly is permissible, but there should not be a 'Pot belly' present. Leaniency is given to sows who have produced litters. 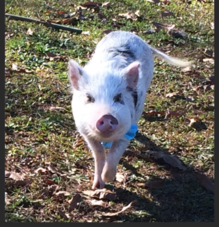 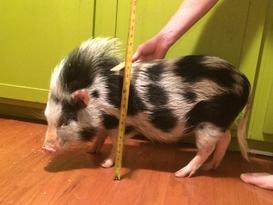 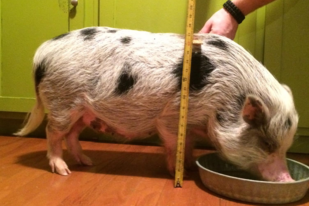 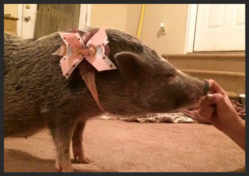 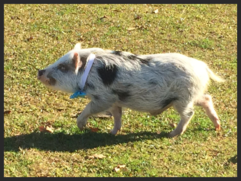 Head: The most prominent feature of the head is a long straight snout that is neither turned up nor snubbed. Eyes are almond shaped, clearly visible, and can be blue to almost black. Ears are small and erect. Heavy jowls and a stubbed nose are to be discouraged.

What are mini pigs?

A Juliana pig is one of the smallest breed of pig. Julianas are a small pig by nature, not a result of breeding down generations of pigs or restricting diet. A full grown Juliana pig stands about 15-17 inches tall on average. All of our pigs are registered as 100% juliana pigs through JPAR and their offspring will also be registered our pigs are also double registered with the AMPA.

Pigs grow skeletally until they are at least 3 years old and can continue to become more dense until they are 5 years old. Height is a better estimation of a pig's size because they are such dense and compact animals. Pigs can be 50 - 100% more dense than dogs so weights can be very misleading when it comes to pigs.

The Juliana Pig is a small colorful pig thought to originate in Europe through selective breeding of various kinds of pigs. The Juliana Pig, also known as the Miniature Painted Pig, is small, spotted, and conformationally sound. It should not exhibit a pronounced pot belly or sway back, should have a long snout, and be slight in frame. Temperament is of the utmost importance since the Juliana has been specifically bred to work with humans. While the Juliana breed is reputed to be quite old it is unsubstantiated as to whether or not the modern Juliana pig is of the same ancestry. Regardless of ancestry the modern Juliana more closely resembles the description of the original Juliana then any other breed today. It is the goal of breeders to produce offsping that consistantly exhibits the characteristics of the original Juliana pig.